Him & Me | ANTON DU BEKE and GIOVANNI PERNICE 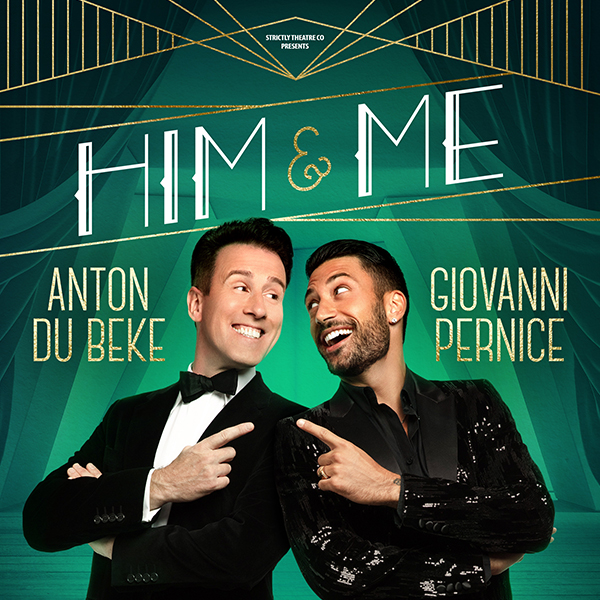 Tickets on sale Friday 25 September, 10am

Brace yourselves for THE best night out in 2021 when two of BBC Strictly Come Dancing’s best loved professional dancers team up for an unforgettable tour - ANTON DU BEKE and GIOVAN-NI PERNICE - HIM & ME!

The dancing duo, who both tour their own successful sell-out shows every year, have decided 2021 is the year to showcase their unrivalled rapport, bringing audiences a collaboration of dance, song and light-hearted fun!

Chatting together at their photoshoot for the tour, Giovanni says “Anton you are my idol. I have wanted to do a show with you for so long now and I’m very, very happy that we can finally do it! Anton Du Beke, you’re a legend! It’s going to be a really fun show!”

“Well, I’m really excited about this! It’s going to be fabulous and I already feel younger just stand-ing next to you Giovanni!! I can’t wait!” says Du Beke.

DU BEKE has been part of the Strictly family since the very first series back in 2004, and has ap-peared every year since, partnering an array of celebrities from supermodel Jerry Hall and tennis coach Judy Murray, to actress Lesley Joseph and TV presenter Ruth Langsford! Although he has reached the final twice - in 2015 with newscaster Katie Derham and most recently in 2019 with ac-tress Emma Barton, his most memorable partnership was with former MP Ann Widdecombe - a match made in comedic heaven! Despite never having won that coveted glitter ball trophy, he has definitely won the hearts of mil-lions of dancing fans across the country!

PERNICE, on the other hand, joined the show in 2015 and has already reached the final three times - with actress Georgia May Foote in his first series, radio presenter and performer Debbie McGee in 2017, and singer Faye Tozer in 2018! He is hoping 2020 will be the year all his dreams come true!

HIM & ME! will be directed by West End star Alan Burkitt, who has performed in shows including Curtains with Jason Manford and Ore Oduba, Top Hat and We Will Rock You. Alan has also chore-ographed for shows Strictly Come Dancing and So You Think You Can Dance?, as well as the UK theatre tour Fascinating Aida.

Joined by a world class cast of dancers and singers, ANTON and GIOVANNI are coming together to put on the show to end all shows - the ultimate entertaining night out! The Ballroom King and the Jive Master bring you HIM & ME! - a true dance extravaganza for all ages.