(Photo opportunities available for £56 with a purchase of a £95.20 ticket) 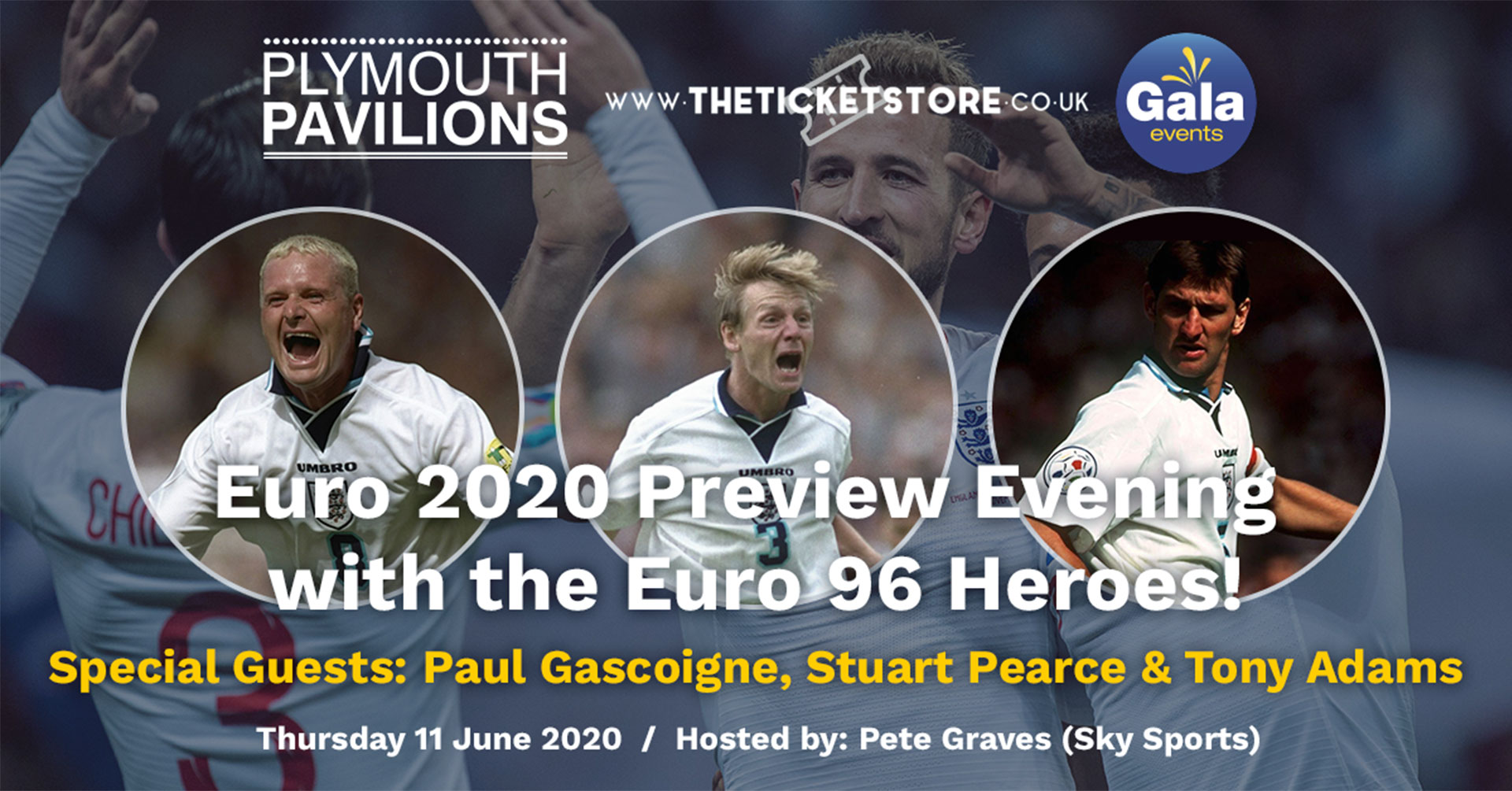 STATEMENT: Unfortunately this performance has now been cancelled due to Covid-19.

Please be assured that all tickets purchased from The Ticket Store for the show will be automatically refunded. If you believe that your card details have changed, please contact The Ticket Store as soon as possible.

Join our Sky Sports host Pete Graves as we welcome three England legends to the stage to preview the Euro 2020 Finals and discuss some of the highlights and tales from behind-the-scenes from their own stellar careers. Key players at the thrilling Euro ’96 tournament, Paul Gascoigne, “Captain Fantastic” Tony Adams and Stuart Pearce each left their mark on one of the most exciting tournaments in living memory.

Who will ever forget the iconic goal scored by Paul Gascoigne against Scotland or the infamous celebration which followed it! Or the incredible emotion as Stuart Pearce lashed home his penalty against Spain to banish the demons from his 1990 World Cup miss!

With over 200 caps between them our star guests are the perfect trio to analyse England’s prospects as current captain of the Three Lions, Harry Kane, leads a superbly talented young squad into battle. It will be fascinating to hear from these three legends as they give the lowdown on the tournament and discuss their own experiences in the beautiful game

Paul Gascoigne A true icon of the game, many would argue that Gazza is the most naturally gifted English midfielder of the last thirty years. A star at the 1990 World Cup where he lit up the tournament at just 23, he went on to win 57 caps for England, scoring 10 goals, including the wonder-strike against Scotland at Euro ‘96. Gazza is still hero-worshipped at Newcastle Utd, Spurs and Rangers, clubs where he enjoyed the best years of his career

Tony Adams The ultimate one club legend, Arsenal’s “Captain Fantastic” played almost 700 matches for the club in a career spanning 20 years and three decades. A fixture in the England squad for over a decade, Tony won 66 caps, scoring 5 goals and captaining the England team at Euro ’96. He was the first, and remains to date the only, England player to make tournament appearances in three separate decades, from Euro ’88 to Euro 2000.

Stuart Pearce Forest legend Stuart ‘Psycho’ Pearce was renowned throughout his career for his tough-tackling, no-nonsense approach to the game, and his blistering shooting which netted him many a wondergoal. Arguably England’s greatest ever left back, Stuart was a key player in the great runs at both the 1990 World Cup and Euro ’96. One of the bravest players to don the Three Lions jersey, he won an amazing 78 caps in all, scoring 5 goals. All guest speakers are subject to final availability. If in the unfortunate circumstance that one of the line-up has to pull out, we will endeavour to replace them with a name of similar stature.